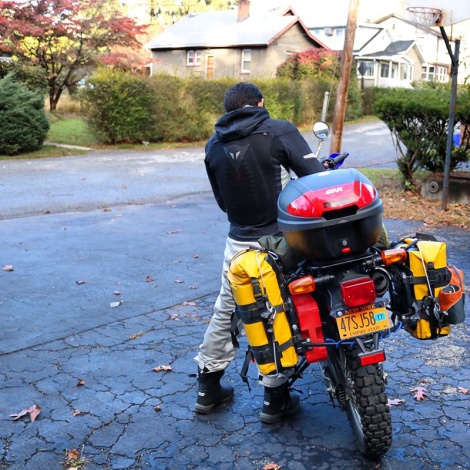 You see, I was originally planning to leave on Thursday the 27th but due to a combination of procrastination , horrible weather, and a last minute cold I ended up leaving on Friday the 28th instead. Once I had left I realized I still had to run a couple of errand, so all things considered I officially left at 10am.

My plan was to head to Austin, TX as quick as possible (3 – 4 days) where I would meet Pat from 2ridetheglobe who has provided great insight in planning the tip as he has gone around half of the world on the same XT250, and fellow inmate SkizzMan who I’ve been chatting to in regards to crossing into Mexico and happens to be friends with Pat. That WAS the plan. Although I didn’t want to rush through any parts, I felt like I could ride around the US whenever I wanted, but not Mexico and Central America so the more time spent there, the better. This decision took me for ride (you see what I did there, huh? Do you?) on a gruesome 12 hour day to Virginia – all on an interstate 😦

Soon after leaving NY I discovered, the hard way, that I need to shut my heated grips well before turning the bike off, otherwise the battery is toast and I need to perform CPR. So I had to do that 3 times before figuring out that it was the grips – Thankfully I carry one of those Micro Starters from Antigravity Batteries, and it was just a matter of open up, clamp and jump.

Oh and by the way, I forgot to mention that right when I left home, I went to the one gas station that had a broken trigger stopper, which lead to a fountain of gas that decorated my gear with an unforgettable smell for many hours to come. Anyhow….

Stopped at a random pizza place somewhere in NJ. I really wanted an egg sandwich even though it was lunch time, but since I saw a deli sign under the Pizza one I went right in. Well guess what? No egg sandwiches – what kind of deli doesn’t have egg sandwiches?! I guess that’s a New Yorker’s problem. Pizza was simple but took care of the hunger issue and off I went. 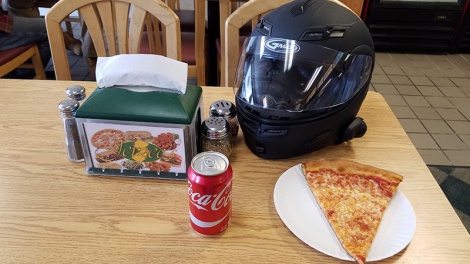 My estimated time of arrival was 630 but with all of the above mentioned “hiccups” GPS had me at 9:00 PM – let me spell it out NINE PEE EMM. Thankfully fellow inmate Raz65man was very patient and waited for me. And then I got a flat tire, woohooo -Sorry no picture, I was pass pissed off.

Ended up making it to Raz’s house at 10:00 PM where he was waiting with a fresh pot of homemade venison chili and corn bread, and boy was I hungry. Delicious food sir, thank you! 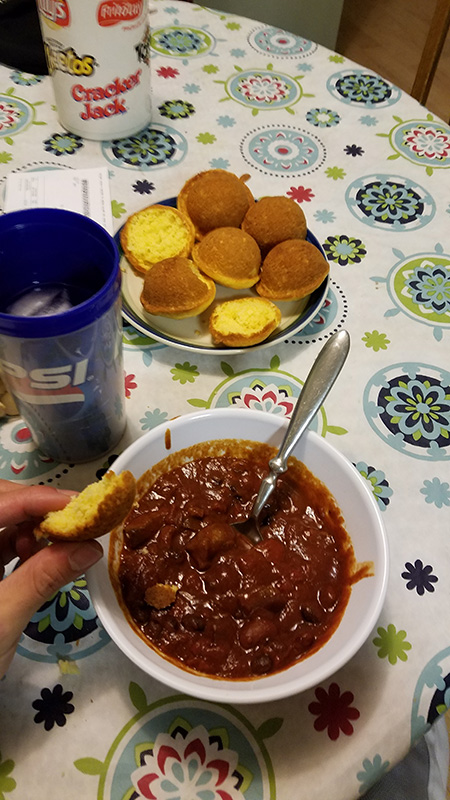 Raz has a couple of dogs, Ior and Ru (spelling?), who were kind of scared at first but then warmed up to me and just wanted to play, unfortunately I only got a picture of Ru who as you can tell, will try to convince you that she is the sweetest dog alive!

And that’s why it WAS the plan. Now I will take my time, enjoy the ride, and hopefully will make it to Mexico by next year, if not that’s ok I’ll go back and eat more chili and hang out with my new dog friends (And Raz I guess 🙂

Lesson learned: Don’t push your body beyond the necessary, you will regret it when you try to go to sleep, and your back doesn’t let you in retaliation for being 12 hours on the road.

One response to “Day 1 – Left Westchester, NY at 9. Then I went back home”