During these days there wasn’t much going on. I mostly focused on getting to Austin to prepare for my border crossing…
Last night was a great first camping night of the trip. Spot was quiet, temperatures where perfect in the mid 60’s, dinner was delicious, and I had the plus of having a herd of dear come right next to my tent to drink some lake water.

Woke up not too late and slowly made my way out of the tent. I did notice that there was an army of ants on the outside of the mesh – must’ve set up right on top of their trails, sorry guys

Before packing up I made a quick cup of coffee on the jetboil and just sat by the lake taking in the view one last time. This is a beautiful place indeed. Once finished I started putting things away and looked at the map to see where I was heading. I did hear a huge explosion which turned out to be a deadly accident at an oil pipeline nearby, it sounded like a bomb had been dropped!

I didn’t really have a final destination for the day so I just set my GPS for Austin and planned to stop somewhere on the way. I’ve been slowing down a lot trying to find a balance between time and distance on the road but in my head I really just want to reach Mexico so I am pushing a bit harder than I should.
After about 1 hour on the road I made a quick stop for gas and breakfast at a gas station where they advertised breakfast and lunch. Even though it was about 11 am, the lady behind the counter said they were all out of eggs but I could have chicken or other “lunch” items. Well, I made a pretty sad face and begged for mercy until she said “ok son I’ll go make you some eggs, you look like you need them” – not sure what to make of that, but after a few minutes I had a delicious egg sandwich on buttery toast with some orange juice, yummmmm. Thanks counter lady! 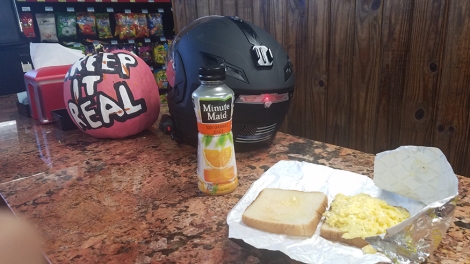 Landscape is starting to change, looking flatter and dryer, and there’s quite a lot of hay farms around the area 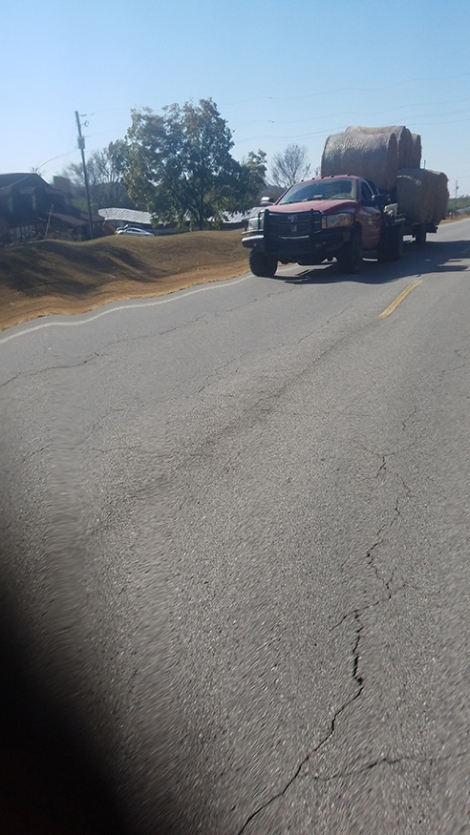 After breakfast I hit the road and basically just rode and rode, stopping only to get gas. At about 4 PM I pulled into a small state park in Mississippi where they had a camping sign. I looked around for an attendant or ranger but did not find anyone so I just followed signs for primitive camping until I found a spot near a lake. There was a guy with a dog on another spot, and a couple of youngsters on another. Very quiet and nice place again. By this time I was pretty exhausted and had not eaten so I totally forgot to take pictures, sorry fellow couch travelers I’m still trying to t get the hang of documenting things.
Once I had set up camp I jumped on the bike and went to a gas station right outside the park to get some water and food. When I was leaving this man approached me and asked if I was camping at the park, it turns out he was the guy with the dog camping right near me. At the moment he’s homeless but a few months back he started cleaning/shinning 16 wheelers and has made enough money to buy a used truck where he carries his supplies, according to him you can make upwards of $2000 on a good weekend. He sticks to Interstates and is now heading south to run away from the slow business that the cold weather brings. By the time I got back it was night time so I quickly ate some Vienna sausages, chips, water and a candy bar. I’m not going to lie to you my fellow reader and forgive me if I come out as being judgmental, but after meeting my neighbor I had an uneasy feeling about staying next to him and leaving all my stuff outside on the bike, so I took everything off and organized it neatly inside my tiny 1 person tent allowing just enough space for me to sleep on, let’s just say it was a cozy cramped night.
Next day (#6) I woke up to a chilly cloudy morning and laid on the tent for some time. When I stepped out to pack up my neighbor came over and made some conversation commenting on locals being unwelcoming and rude, he said he was having a hard time finding work in the area and needed to make money to get food and pay for another night of camp – wait you have to pay to camp here? Wops sorry Mississippi, but in my defense I did look around for a bit and found no one. We said our goodbyes and off I went, hope he finds work and gets where he wants to go.
I pulled into a rest stop to stretch and make some coffee as I hadn’t had any breakfast. It was a good cup of joe accompanied by half a snickers bar, breakfast of champions!

Another day of ride, gas, ride. Aiming to be in Austin tomorrow night. After a fairly short, lazy day I gave in and booked a hotel in Bossier City which is right at the border between Texas and Louisiana. This place has a bunch of small casino resorts and a small boardwalk. As a gambling aficionado (who seems to always lose) I brought my stuff into the hotel, took a shower and headed for the boardwalk. The newest place here is called Margaritaville Casino Resort so I decided to check it out. My budget was $50 to play $5 roulette, so 3 hours later and….. $75 short….. I headed back to the hotel, not bad for free drinks and a few hours of entertainment, although in hindsight I just spent 2 days’ worth of moto-travel. Lesson learned. 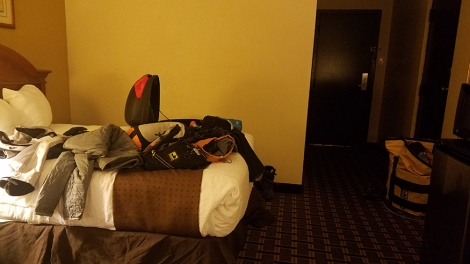 This morning (Day 7) I got my stuff ready and went to grab free breakfast at the lobby. Food was almost finished even though it was very early (around 8AM), and whatever was left was either cold or badly cooked – pretty surprising considering I stayed at a Ramada Inn which tends to have decent amenities – So I had some grits, a waffle, and some coffee before heading out. 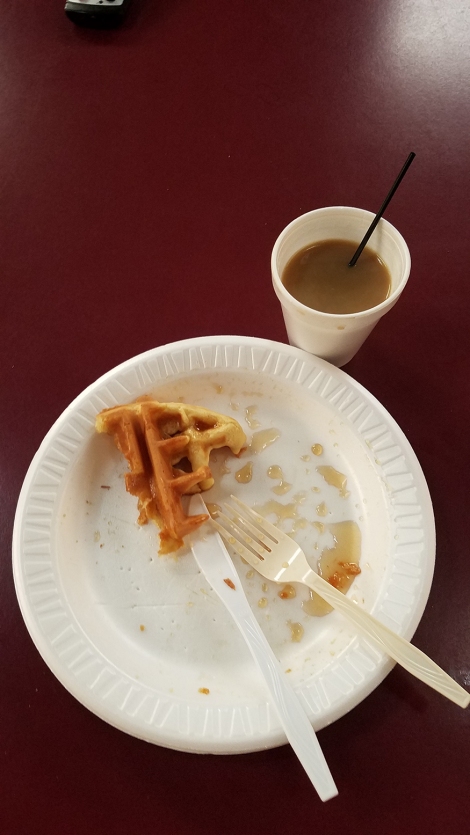 Before leaving I reached out to Pat from 2ridetheglobe.com who had offered to host me for the night in Austin, and coordinated meeting plans for the afternoon. After being on the road for some time I found a very particular gas station that offered, amongst other things, a full on smokehouse – welcome to Texas! 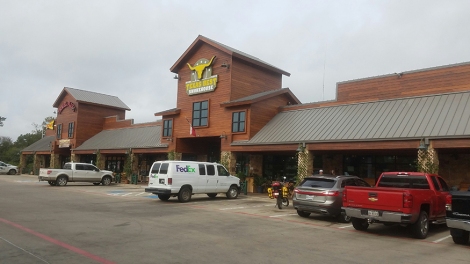 I hung out for a bit looking at the assortment of products until I notice it was raining so I paid for my stuff and headed out. This would be the first rainy day in many to come. 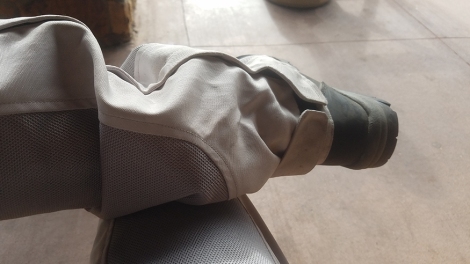 When I entered Austin I could see in the distance a very dark cloud, and asked the gods to steer me away from it.
No one listened.
I had to drive right through the eye of the storm as I battled to stay upright, hoping there were no holes on the ground because I could not see past my (fairly big) nose. I could feel trucks flying by me and remember thinking “wow these people probably can’t even see me”. It was very scary. Eventually I made it to Pat’s house and was happy to be indoors after a long day on the rainy road. Pat and Diana quickly got me set up in my own fancy room and right away made me feel at home. We went out to a nearby deli-style restaurant where they bought me a delicious meatball marinara sub with a coke, thanks guys I really was starving! After eating and chatting for a bit they had to head out, so I staid doing some laundry and taking a nice warm shower – once again I am amazed at the kindness that comes from (ex)strangers that share the passion for the road.
Tomorrow I shall meet fellow inmate SkizzMan who has plenty of experience riding in Mexico and happens to live nearby. He also discussed possible routes with Pat back when he left on his RTW trip so this is bound to be an exciting meeting!
Daily Stats:
Day 5 – 298 Miles
Camping: Unintentionally Free at State Park (price was $14 for primitive according to neighbor)
Food: $10.47 (eggs and juice $4.50, 2 waters $1.70, Wendy’s $4.27)
Gas: $11.92
Total: $22.39
Day 6 – 165 Miles
Hotel: $48 Ramada Inn
Food: $10.54 (Sonic combo $5.54, water and snacks $5)
Gas: $12.87
Casino: $70
Total : $141.41 what a disgrace…!!!!!!!
Day 7 – 298.4 Miles
Sleep: Free ADVrider host
Food: $2.05 (nuts and water snack)
Gas: $12.67 (5.778 Gallons)
Total: $14.72

3 responses to “Days 5-7 On Explosions, Homelessness, and Gambling”